Who We Are: Doug & Martha Martin 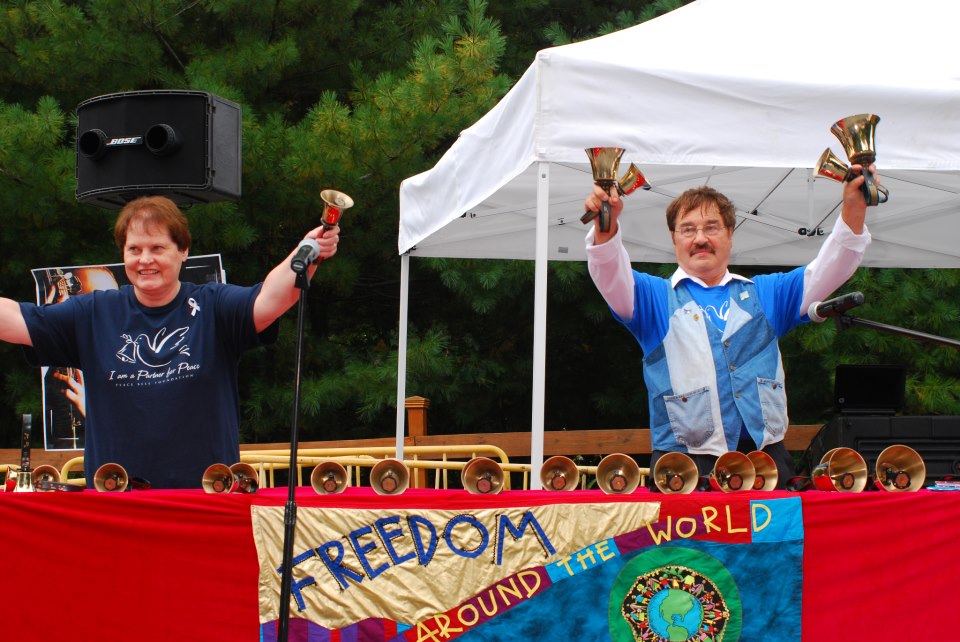 Martha and I – Founder of the Worldwide Peace Bell Foundation – have been ringing bells as a musical duo, (voices, piano, violin, concertina & hand-bells) for 28 years.
We have performed over 1000 Arts-N-Ed programs from elementary to high school and special Ed Populations. We have also performed at Lincoln Center, Carnegie Recital Hall, Tavern on The Green, National Arts Club, Harvard Club, Museums, the Greenbrier & Mohonk Mt House and other resorts, on cruise ships along with churches and retirement communities along the East Coast and out to the Midwest.

Our special performances with bell ringing moments have been at the United Nations for the Japanese Peace Bell Earth Day Ceremony in 1992. You may recall that it was in Dec of 1991 that Mikhail Gorbachev resigned, and the Soviet Union was dissolved. At that performance met Earth Day Founder, John McConnell so it was a marvelous experience to be there at this time which also happened to be my birthday, March 20th.
We also performed for the International Handbell Festival in Orlando Fl. and at the anniversary of the Bok Tower in Lake Wales Fl.

We began our non-profit, 501c3 Peace Bell Foundation, in 2009 and had several web sites BillionBellsForPeace.org among others begun in 2000. These sites have all be hacked and are now deleted except that we might try and renew/rebuild the BillionBellsForPeace.org sometime soon.
We have a few of these peace bells on our present site but not nearly as many as before.  The most comprehensive site for peace monuments you may discover is a dear friend of ours, Ted Lollis, an honorary member of Rotary Global History Fellowship   https://peace.maripo.com/p_bells.htm  He has found more than 154 Bells & Gongs for Peace &/or International Friendship Around the World.

Your donation to the Peace Bell Foundation is gratefully accepted.